I love Green Lantern, but did not love this movie. The problem was the mediocre story. The best thing I can say about this film is that it was not as bad as most of the reviews I’ve read. That may be because I went in with low expectations and was pleased to find the story coherent and the special effects nondistracting. This movie should do well in rentals and on cable.
It’s a testament to Ryan Reynolds’ (Hal ) ability and charisma that he brought some humanity to this woodenly written role. Though I was never happy about his casting, I have to admit after seeing the film, he made a decent GL and probably kept the movie from getting boring. Blake Lively was pleasantly perfect as Carol Ferris, GL’s boss and love interest. I think she struck a good cord between the character as written in the comics, and a realistic modern business woman. Based on her turn in this film, I hope she gets more movie roles.
Of Special note is Mark Strong as Sinestro. He's clearly been set up to be the baddie in the sequel, but his excellent stage presence and strong performance made it abundantly clear that this film lacked a good villain. It would be great if Warner realized what they did wrong in this movie and tried again with a better story. It was not lack of interest in this character that was the problem with Green Lantern. I'd like to make a comparison with Star Trek The Motion Picture. That film had similar problems to GL in that it too lacked a cohesive villain and had a mediocre story. But, although panned by the critics and fans, it was followed up by an amazingly good movie (The Wrath of Kahn) with a kick-ass baddie. Sinsetro can be Hal Jordan's Kahn Nonnian Singh if a sequel were to happen.
There’s really not that much more to say. The story had a ho-hum effect on its audience. Much like Super 8, this movie brought nothing new to its genre. What makes it especially tragic is that Iron-man showed how to take a second-tier character and turn it into a first-rate movie. DC used to be known as the company that could make successful movie and TV properties out of its characters. It seems to be stumbling while Marvel’s running away with the ball. Let’s see how Zach Snyder’s Superman fares in 2012.
I rate this film $7.50 out of the $13.50 I paid to see it. If you can catch a matinee for half price, it’s worth the time.
Posted by Edward Lazellari at 4:18 PM 2 comments 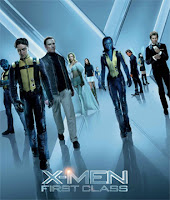 I went into the theater with low expectations for this movie and was blown out of my seat. X-men: First Class ranks among the best of the superhero genre movies, in the company of Dark Knight, Spiderman 2, and Superman.  It also distinguishes itself as the textbook example of what a prequel should be. I rate it at 120% entertainment value relative to other films in this series.
The story is set in the 1960s, and emulates perfectly the look and tone of the Sean Connery Bond films of that era. Kevin Bacon, as Sebastian Shaw, is surprisingly brilliant as the villain, and could hold company with Goldfinger and Blofeld and probably come out on top. No self-respecting world-dominating megalomaniac would be caught dead without a loyal familiar to stroke his ego, and this part is played beautifully by January Jones as Emma Frost (the White Queen) who is the cinematic mashing of Pussy Galore and Blofeld's Persian white kitty. In truth, this movie is very much a spy thriller in the 007 vein with super humans added in to optimum effect.
The story was expertly written, and Matthew Vaughn's direction was perfect; there was not a moment when the film lost momentum or pulled you out of the narrative. James McAvoy as Charles Xavier (Professor X) and Michael Fassbender as Magneto portrayed an effortless friendship between the two men reminiscent of the chemistry between Kirk and Spock. By the end of the movie, you believed their relationship would span decades. More importantly, you believed why, despite being on opposite sides with regards to their methods, Magneto would never kill Charles Xavier. Watch this film and afterwards put on the first X-Men movie... it's a perfect fit. "First Class" sets up the earlier films in the series in a way we all wished "Revenge of The Sith" would have set up Episode IV: "A New Hope."
The only sad part to having seen X-Men: First Class is that it came so early in the summer, nothing else is likely to match it for entertainment value and quality. This is a well-made, entertaining movie, so run, don't walk, to the theater. I rate this film $13.50 out of the the $13.50 to paid to see it. There isn't a better deal in town.

Posted by Edward Lazellari at 11:10 AM 0 comments