My Fantastic Fables Short Story, "No Good Deed" Is Up (DarkFaerieTales)

My short story for DarkFaerieTales' Fantastic Fables series is up.
Win a chance at a free copy of my book.

Outlander Is A Fun Marvel Of A Book 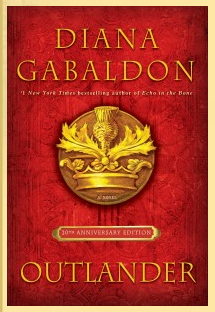 Okay, I know I'm 20 years late with this, but my friend Dessi just gave me book one of Diana Gabaldon's Outlander series, and it sort of blew me away. Halfway through the first book, I was grateful this was part of a series because I didn't want to let these characters go. Sure, it's chock filled with archetypes (the cliched rugged hero Scotsman who can fight like Erol Flynn; the crunchy salt of the earth highlanders; and the ideal woman, smart, beautiful, English prim, but able to kill and heal with equal proficiency), but damned if Gabaldon's writing doesn't bring a refreshing breath of air into some stale tropes.

Claire is an English nurse who's survived WWII and takes a holiday in Scotland with her estranged husband who worked for British Intelligence during the war. By way of a druid ritual, she finds herself suddenly 200 years back in time, when being English north of England was about the worst thing you could do.  Jamie is a Scottish outlaw, wanted by the English, most notably a Dragoon captain that turns out to be Claire's husband's ancestor. This twisty-turnie love story is filled with adventure, death, and a whole lot of love. 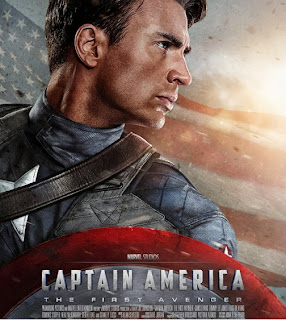 Holy Cow! Holy Cow! Holy Cow! Leave it to Marvel to have two of the best movies this summer. I didn't think any movie would soon match X-Men First Class, much less in the same season, but along comes Captain America to complete the salt and pepper set. I finally got around to seeing it after being stuck on a gorgeous Italian vineyard opening weekend, and I can't praise this movie enough. It has heart, it has action, it has a brilliant script, and the acting was superb to the point of being sublime.

At first I was apprehensive about Chris Evans starring in the title role, having been underwhelmed by his Johnny Storm in the Fantastic Four films, but he fits into the skin of Steve Rogers effortlessly. The entire cast from Hugo Weaving to Tommy Lee Jones hits it out of the park in classic Babe Ruth fashion. Hayley Atwell as Peggy Carter is as endearing and stunning as women come, and the chemistry between her and Chris had a classic vibe like that of the films from the 1930s and '40s.

The sets were a good cross between true period pieces and updated versions of an old '40s serial, which as some of you might not know included a run of Captain America movies during World War Two. The mini bomber planes alone were reminiscent of the era, having been in stories of the day including the animated Superman Shorts from Fleischer Studios.

One of the most entertaining movies of the summer. There's something in it for everyone, even your date guys. Do yourself a favor and see it on the big screen. I rate this movie $13 out of the $13.50 I paid to see it.

"I’m definitely looking forward to the next book to find out what becomes of these characters."

Review: Like Its Protagonist, All Men of Genius Gets An 'A'

The last steam punk novel I read was The Difference Engine, and that was over 10 years ago. I liked it well enough, but the genre didn't catch on with me. I think had I read All Men Of Genius by Lev AC Rosen, though, steam punk would have been more consistent fare in my literary diet. This sideways retelling of Shakespeare's Twelfth Night is a fun, witty tale, with characters you wish you could befriend and drink with at a dingy London pub.

Rosen's devotion to character does not detract from the main tenant of steam punk, the revisualization of a more scientifically advanced Victorian world. His England is wondrously detailed, original, and still maintains an element of mystery. If I have one criticism, it's that I want to know even more about the parts of this world that were not mentioned in the story. The school of science where the lion's share of the action takes place is architecturally well thought out. (I've never been to London, but feel as though the place as described must exist in some form or another.) The comradery and competition within the school is spiritually reminiscent of Harry Potter's Hogwarts, only with the eccentric students pursuing scientific discovery instead of magic spells. Alliances are made early on between the students, with Violet and her friend Jack falling in with a noble crowd suggestive of Gryffindor.

I don't want to go into much detail about the story itself because this is really a journey best discovered by letting it unfold. The short of it is that the protagonist, a young woman who's been denied the opportunity to study science due to her sex, is actually one of the great scientific minds of her age. Sufficed to say, she doesn't take "no" from the school's admission board very well and concocts a scheme to get her education anyway, at the risk of massive reprisal. Violet is a heroine you can't help but root for. Despite her unorthodox methods of getting into the school, and the doubts and tribulation that come along with her plan, Rosen never loses the beauty of Violet's innocence despite her intellect, and keeps her true to herself. You just want to jump into the pages and help Violet and the gang in their adventure.

I would love to see this book as a movie or television series. Violet, as a character that uses her mind and promotes the benefits of study and education, would make an excellent and entertaining heroine for girls (and boys) to aspire to be like. Maybe Spielberg or J.J. Abrams will pick up All Men of Genius and be inspired to make it happen.