Peter David Reflects On Transformers 3, DC's Reboot, The Ailing Comic Industry, And How To Turn Things Around In Fictional Frontiers Interview

Having worked in the industry, I can tell you that many of writer  Peter David's ideas in his Fictional Frontiers interview on how to improve comic book sales and accessibility to new fans are right on the mark.
In addition to his views, I would add that they've gotten ridiculously expensive relative to their costs in previous generations, and that, that may be a factor in alienating new readers. From a kid's perspective, who wants to pay $4.00 for a periodical that will be read in 15 minutes when you can save up for a new video game? Comics were the publishing industry’s way of turning a cheap profit. It started by using up newsprint left over from pulp books back in the 1930s, and were a huge source of income because the margins were good. The price of a comic book remained 10 cents from the 1930s until 1962, when it escalated to 12 cents, and then 15 cents in 1969 For the next 10 years until 1980, it increased in increments of only 5 cents every few years.  Industry dynamics changed when they introduced more expensive Mando stock--a white, high-quality newsprint and the glossy Baxter stock paper in the 1980s.  Although good sales supported the change to better paper and printing when they had artists of Brian Bolland's (Camelot 3000) or Frank Miller's (Dark Knight) caliber, it simply wasn't worth the money for the other mediocre fare they put out. (Typical of the marketing mentality, they thought the quality of the paper would sell the books.) From 2000 to 2010, the average book saw a 100% increase in price with no real new inovation to justify the added cost. The last time I entered a comic shop, prices on monthly issues were north of $3.99, and I wondered how this business model could possibly succeed. I wondered if they had hit a wall on cost cutting. In the 1990s they got rid of colorists and in the aughts they got rid of letterers. If you go up the food chain that means inkers are next and eventually they will have computer programs that will draw the stories as well. But will any of it matter if they don't get books into new hands? Virtually gone is the return market (paper stands, convenience stores), where kids were first exposed to comic books, in favor of direct sales where you have to make an effort to find the stores.
Beyond gimmicks and reboots, in the end, the editor is key. If you hire good editors--like Ralph Macchio at Marvel (Miller's Daredevil, Simonson's THOR)--you end up with books people want to buy regardless of the gimmick (and sometimes in spite of it.) Based on his views in the interview, Peter David would also be a great comics editor. He's a successful writer, and unlike many creative types, he thinks like a businessman. Peter quoted Neil Gaiman in saying that comics blend other art forms to create a new one. Words by themselves are novels and pictures by themselves are art, but put them together and you have comic books. Similarly, a comic book editor needs to wear two or three hats to be a successful creator of books. In addition to recognizing good ideas and good writing they also have to know good sequential storytelling and draftsmanship, and they have to have some business instinct.
Speaking of good editors, Bob Greenberger was mentioned in the interview, and I had the pleasure of meeting Bob when he was at DC in the 1980s. He gave me excellent and practical advice about my work and what I needed to do to get into the field. At the time, I was a Joe Kubert school student with delusions of grandeur who thought he knew it all. (I just described most art-school students.) Bob was a class act who knew enough to humor the young and gave them advice they needed without ever discouraging them. Bob, if you read this, I'm saying thanks and letting you know it is never a wasted effort. Eventually we grow up and it all clicks.
Listen to the Peter David interview by Sohaib Awan at Fictional Frontiers and get the 311 on life the universe and everything else.
Posted by Edward Lazellari at 7:14 PM 0 comments

Graeme Flory says of AWAKENINGS: "A thoroughly entertaining read with a cast that you can really get behind and root for." 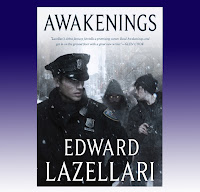 Read the entire review on his blog at Graeme's Fantasy Book Review.
Posted by Edward Lazellari at 3:25 PM 0 comments

"This solid debut will appeal to fantasy fans looking for familiar bones under a modern skin." --

(Author: Hilary Davidson; Mystery; Forge books; Hardcover $24.99)
I usually read for a short while before starting on my own writings because I find that it knocks loose the vocabulary in my brain. In that regard, The Damage Done, by first-time novelist Hilary Davidson, presented me with a slight problem... I kept blowing off my schedule to read just one more chapter of this gripping mystery.
After living in Spain for several months, Lily Moore, a travel writer and atypical Manhattanite, comes home to the lower east side to manage the burial of her recently deceased sister Claudia. The only problem is, the woman in the morgue is not her sister. Lily is a refreshing mix of Carrie Bradshaw (sans the puns) and Olivia Benson, set upon a path of intrigue and danger by the actions of her heroin-addicted younger sister. An old fiancé reminiscent of Mr. Big and trying to rekindle their flame, Lily's gay best friend Jessie, the colorful tenants of her lower east-side tenement, a pair of wizened NYPD detectives, and the players surrounding her sister's debauched life round out the playbill on this snappy mystery.
Because this is a mystery, and since I hate it when reviewers reveal elements in my own stories that I had wished the reader to discover on their own, I'll refrain from going into details about the plot. But I will say that Davidson's attention to detail and character are impressive. Her NYPD detectives do not come off as incompetent or buffoonish in order to make the heroine look smarter, and even characters that appear archetypal at first prove to have deeper dimensions as the author scratches at their surface one chapter at a time. Davidson's plot moves along at an eight-minute-mile pace with crisp dialogue and efficient prose. I can see this as a movie and found myself even casting parts as I read. A strong debut by a freshman novelist.
Posted by Edward Lazellari at 9:41 PM 0 comments