In Time Is Money 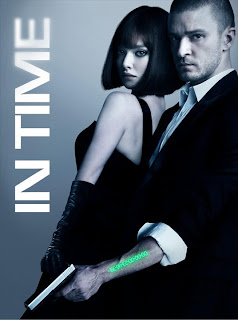 I initially avoided In Time because of lackluster reviews. I’m glad I eventually relented because it is one of the smartest dystopian films to come out in a long while and one of the most underrated movies of the year. Though Harlan Ellison claims it's based on one of his short stories, the film’s "system-is-out-to-get-you" narrative feels more like a Philip K. Dick progeny (the originator of such paranoid fare as Blade Runner and Minority Report).  Excellently directed by Andrew Niccol (Gattaca), the film debuts Justin Timberlake as an action hero, playing Will Salas, a down on his luck factory grunt who is big on heart but short on time. His love interest is the heiress Sylvia Weiss, played with preternatural conviction by Amanda Syfried. A bevy of hot Hollywood A-listers (Cillian Murphy, Olivia Wilde, Alex Pettyfer, Vincent Kartheiser) round out the cast, bringing sexy back to science fiction.
Read more »
Posted by Edward Lazellari at 5:24 PM 0 comments 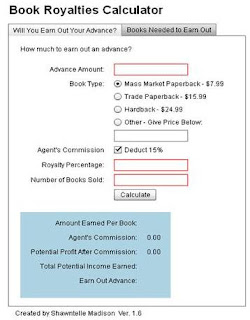 As writers, we all hope to earn enough from our craft to live. Nothing promotes the completion of a next book as much as income from the last book (and the time needed to write it). Leaving that day job to write full time can be a big, scary step. For those of us not in the graces of a wealthy sugar-momma, the Book Royalties Calculator by Shawntelle Madison is a valuable tool in helping determine how much your royalties might be.
A round of applause to Shawntelle for creating this.