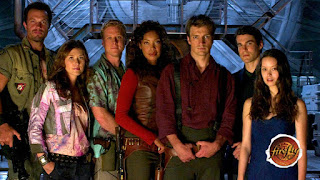 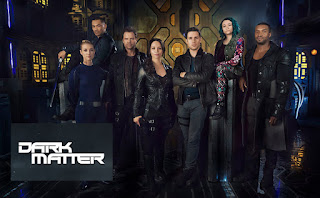 Lower production costs have made ambitious programming less risky. SyFy took the plunge recently and produced a plethora of new space operas: Killjoys, Dark Matter, The Expanse--but of all these new series, only Dark Matter captures Firefly's essence. The writing and show mythology only got better in season two, something Firefly never got its chance to prove.

Both shows exist in a corporate oligarchy, both crews live aboard ship, both crews take on legally questionable jobs to keep the pantry stocked and gas tank filled. Both sets of characters are burdened with dark, episode-worthy back-stories. You can pair up many of the characters as alternate versions of the other between the two shows: Kaylee and Emily (Five) are the cute genius ingénues keeping their ships humming and balancing the gruff personalities of the tougher characters with their sweet innocence. Boone (Three) and Jayne are the tough gun-loving comic relief that you can count on to throw a punch or start a brawl on the fly. Portia (Two) and Zoe are no-nonsense kick-ass female officers, who are in a way the defacto moms of these crews because of their grounded approach and common sense. Kal and Shepherd Book, beyond sharing the distinction of being the men of color on their crews, have secrets in their past kept from their crew mates, though Kal's was revealed in season two and Book's we can only guess at because of the show's early cancellation. Until recently both ships even had pretty-boy doctors on the run from the law.

Each show channels the spirit of the Wild West, the new frontier. Firefly was more obvious about it with its heavy country style of dress and talk, but this is a common theme among most of the space operas. Even Star Trek was pitched as Wagon Train to the stars. Dark Matter and Killjoys are very much the lawless West, but what sets DM apart is the ensemble cast--a gaggle of mismatched crew mates trying to make due with their personal issues in an enclosed, hermetically sealed hunk of metal. And despite that solitude, the Raza represents freedom to its crew, a freedom most citizens of their universe can only dream of. It's a home. It's a place where everyone within, quirks and all, can be family and can be safe. And in this, it is very much Firefly's heir apparent.

Posted by Edward Lazellari at 1:19 PM