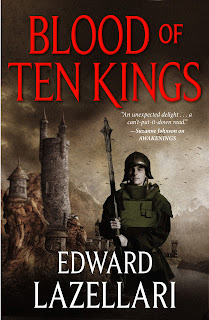 Daniel awoke in a dark wood. The queasiness, aching joints, and vertigo were bad...worse than the morning after he and Adrian snuck off with Mr. Lutz's pint of Jägermeister--which he and Adrian surmised must be the German word for Nyquil.
Daniel tried to stand up, but his head weighed fifty pounds and pressed him back on his ass--the world was two sets of swaying phantom images attempting to converge into a single picture. He closed his eyes and put his head between his knees for a moment. Then, slowly, he lifted his head and looked around.
The brush was dense and riddled with thorns and thistles that threatened to scratch out an eye and scar you like a rabid coon. A smoky haze softening the edges of the world reminded Daniel of old Hollywood movies that used nylons over the lenses to soften actresses past their prime. The forest smelled of bacon.
The last thing he remembered in the meadow was trying to help Seth and then a searing light. Then just infinite blackness--he and his friends were specks of dust flying through an immeasurable vacuum. Daniel couldn't gauge their velocity, but millions of lines of light, what he could only imagine were entire universes, riffled past like the edges of discs in a cosmic jukebox--in the deep reptilian recesses of his mind, he knew that if they'd collided with so much as a stray proton, they would be obliterated. And then they fell toward one disk...and then they were pulled toward the darkest pool in that light, like a still lake as seen from the air. It drew them like a beacon in the storm. Lelani did something--though how she could move or think in that state was beyond comprehension--she changed their course. The wizard found a stream away from the dark spot and diverted them all--but it was rough...literally fighting momentum and thrust from midair.
And then he woke up here...alone.

Posted by Edward Lazellari at 11:34 AM